The Santucci Award is the highest honor the NBOME bestows, given to members of its Board, staff, or committees for outstanding contributions to the mission of the NBOME and requires a minimum of ten years of service to the organization. 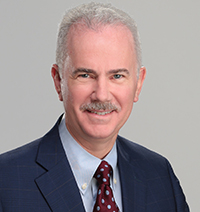 Dr. Burns served for nine years on the NBOME Board, where he was nominated via the American Osteopathic Association (AOA) Board of Trustees. On the Board, Dr. Burns served in numerous leadership roles, including as chair of the Nominating Committee and Board representative on the Level 3 Advisory Committee.

In 2002, FOMA named Dr. Burns Physician of the Year, and in 2007 the organization presented him with a Distinguished Service Award. Ohio University awarded Burns the Alumni Medal of Merit in 2018. He and his wife, Janet, maintain a family medicine practice in Orlando, Fla.

“Ron has been an invaluable resource to the NBOME, and we have benefitted greatly from his professionalism and his years of experience in licensure, governmental affairs, and professional advocacy,” said John R. Gimpel, DO, MEd, president and CEO of the NBOME.