Matching into Competitive Specialties with Only COMLEX-USA – Interview with Courtney Cox, MA, OMS-IV

We met Courtney Cox, MA, a fourth-year medical student from Arizona College of Osteopathic Medicine (AZCOM), on Twitter after she tweeted to encourage other students that they can match using only COMLEX-USA scores. 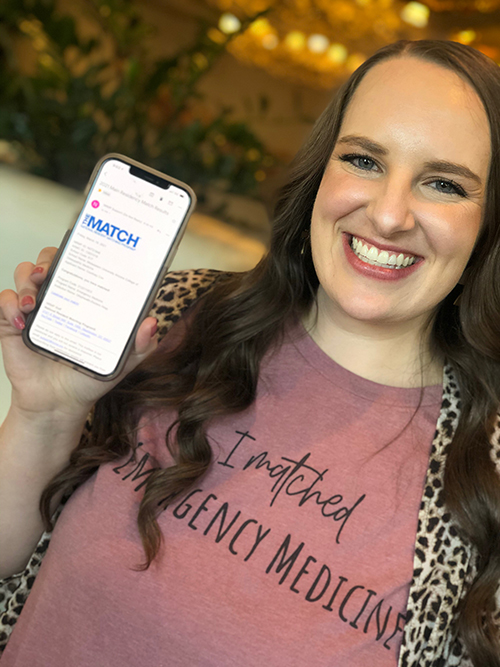 We met Courtney Cox, MA, a fourth-year medical student from Arizona College of Osteopathic Medicine (AZCOM), on Twitter after she tweeted to encourage other students that they can match using only COMLEX-USA scores. Courtney shared that she was able to match into her dream specialty: Emergency Medicine, where she will complete her training at OhioHealth Doctors Hospital Emergency Medicine Residency Program.

Tell us what inspired you to become a DO, specifically.

I was first introduced to osteopathic medicine when I was a patient in the emergency department during my sophomore year of college. At the time, I was already on the path to go to medical school, but I didn’t know the difference between an MD and a DO. While I was at the ER, I had a strong impression of the doctor treating me there, who I later found out was a DO. That discovery was what triggered me to research more about what osteopathic medicine was. After that, I found out that I strongly believed in the core foundations of osteopathic medicine—our body is a unit composed of the body, mind, and spirit—all of which are vital to assess in each of our patients.

Prior to medical school, I watched my grandmother battle cancer. Initially, her physical body was deteriorating, but her mind remained sharp and her spirit uplifted. Witnessing this is what allowed me to truly realize that her body, mind, and spirit each played a role in her overall health. And when I thought about my view of healthcare—how I wanted to treat my patients, I knew that pursuing osteopathic medicine was ultimately the right path for me.

Congratulations on your Match into Emergency Medicine! How did you choose this specialty?

I’d known I wanted to be a physician since high school, but I was first introduced to the exciting field of Emergency Medicine while I was a scribe during my gap year in the emergency department. I chose to scribe for a full year, then did a one-year master's program for my Masters of Arts in Biomedical Science at Midwestern University, going then to their medical school directly after that.

Everyone always told me that I would find my specialty when I found my people, and it was literally less than 15 minutes on the first day of my emergency medicine rotation during my third year of medical school that I knew this was the best specialty for me. I love the diverse medical pathology that presents every day, along with the ability to treat patients within the community from all different walks of life, while using our knowledge and skills to address a variety of emergencies.

We understand you only used COMLEX-USA scores when applying to residency—what prompted that decision, and what advice would you give students who are thinking of doing the same?

I was initially scheduled to take COMLEX-USA Level 1 and USMLE Step 1 five days apart from each other. I did this because it seemed like it was what everyone else was doing—so many people told me that I also needed to take USMLE because I was planning on applying to a competitive specialty. However, during my first dedicated board study period, I realized preparing for both exams was like trying to run two completely different marathons. The exams are very different, and studying for both of them simultaneously posed a challenge for myself. That was why I ultimately decided to focus my efforts on only COMLEX-USA Level 1, and cancelled my USMLE Step 1. And when it came time for the next round of boards, I only scheduled the COMLEX-USA Level 2. But because I’d made that decision, it was so much less stressful—I felt I had more focus and could maintain a positive and optimistic attitude since there was only one exam I had to focus on.

I was actually, and thankfully, in the position where I was able to decline several residency interview invites because I had sufficient COMLEX-USA scores, despite not having a USMLE Step 1 score. This isn't talked about very much, and I want to bring attention to it, with the hope that our profession can have more osteopathic students matching into competitive specialties with just COMLEX-USA. At first, I felt embarrassed that I didn’t have a USMLE score when applying to a competitive specialty—I felt like I was navigating uncharted territory as an applicant, and it really shouldn’t be the case. I want to be a voice for the students coming after me to know that they can do this with just COMLEX-USA scores.

I also ultimately decided that what I wanted in a residency program was for them to respect my licensing exams as they do the MD examination. DO students shouldn’t have to pay for and take double the amount of board exams to be on an even playing field. Why should residency programs require me as a DO to take both? I am really proud of my osteopathic education and I want residency program directors to acknowledge and respect the decision each of us make to become a DO.

I do think that we are heading in the right direction towards eliminating DO bias, but we still have a long way to go. I hope to see continued acceptance of DOs in graduate medical education across the country, which hopefully allows a greater number of students to match into competitive specialties with only COMLEX-USA scores.

We often hear the phrase ‘osteopathic distinctiveness’ used across the profession. What does that phrase mean to you personally?

Our osteopathic training allows me to have a larger understanding of the structure and function within the body, and I think it's so important to be able to have this foundation because it can drastically change someone's life by recognizing that they might not have a disease or a diagnosis that has to only be fixed with medication. I might have a patient that comes into the emergency department with back pain, and I've ruled out all of the other acute pathologies. If I think it’s musculoskeletal, they could really benefit from osteopathic manipulative treatment—such as myofascial release—and walk out of the emergency department feeling a lot better. I want to use osteopathic manipulative treatment when I can to be able to aid the body in healing itself, and I'm so proud to be a DO.

Looking back at how you prepared for your most recent level of COMLEX-USA, would you have taken a different approach to studying? What advice do you have for other COM students who are preparing for COMLEX-USA?

My most recent COMLEX-USA exam was Level 2-CE, and I plan to take the same approach when studying for Level 3. I learned from a lot of mistakes I’d made when prepping for Level 1, and did much better on Level 2 because I’d fixed my approach to studying.

My level one preparation period was focused on passive learning—reading a lot of material versus active learning, such as using practice questions or flashcards, which utilize spaced repetition. You’re not going to be able to read the same textbook five times, but you’ll be able to use a variety of practice questions to ingrain the same principles from them. On top of that, it can be easy to have a resource overload—so be sure to focus on only two to three. That said, I took the active learning approach for Level 2 during a much shorter time period, and it was a huge improvement.

The Road to DO Licensure has many unexpected challenges that I’m sure you’ve experienced, including burnout, stress, and anxiety. Tell me some of the major challenges you’ve faced while taking COMLEX-USA and some advice on how you personally overcame them.

The first time I took COMLEX-USA, it was a challenge being able to focus for the length of the exam while also operating under the time constraints. These exams are timed, and it’s necessary, so we as students need to figure out how we can do our best under these constraints and focus our practice efforts towards preparing for that. I would take four-hour practice exams, and if I could maintain my focus for that amount of time, I knew I could likely extend it the rest of the way. For example, when someone is preparing to run a marathon, they don't practice by running all 26 miles; if they can make it to mile 16, they're likely going to have the stamina to be able to endure until the end.

The dedicated board prep periods are so challenging; they're full of anxiety; they're full of stress. During them, I had the inclination to say ‘no’ to my family and friends if I got a dinner invite. But during my Level 2 prep period, I decided to start saying ‘yes’ instead, and I had better balance because of it. I think that balance allowed me to enter into my exam with a much healthier outlook. My performance also reflected this.

There are so many things I'm looking forward to because I'm finally going to be a resident physician! I would say, ultimately, I am excited to finally apply all of these years of hard work. As an emergency medicine resident physician, I'm looking forward to being able to connect with my patients of all different backgrounds and cultures while treating and advocating for them in their most vulnerable moments.

BE the Change You Want to See — Interview with Nicholas Harriel, OMS-IV, PART I