From ESL student to DO – Interview with Amir Khiabani, MS, OMS-III

Amir Khiabani, MS, OMS-III, was recently appointed to the Special Commission for Osteopathic Medical Licensure Assessment as the Student Osteopathic Medical Association (SOMA) representative, and we wanted to get to know him better by featuring him in our latest installment of the Stories from the Road series. 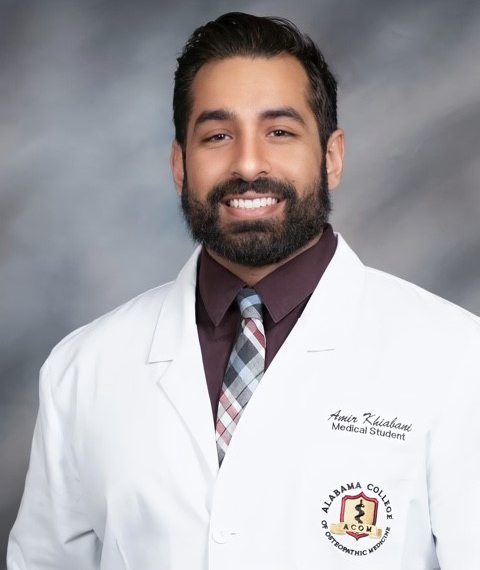 Amir Khiabani, MS, OMS-III, was recently appointed to the Special Commission for Osteopathic Medical Licensure Assessment as the Student Osteopathic Medical Association (SOMA) representative, and we wanted to get to know him better by featuring him in our latest installment of the Stories from the Road series. Alabama College of Osteopathic Medicine (ACOM) student doctor Khiabani is actively involved with SOMA as Region II Trustee and was recently reelected to be part of the senior board as National Treasurer. To him, SOMA is family-oriented in the same way osteopathic medicine is—in that he sees his experience as more than just something to put on paper, but rather something to live. Amir also enjoys being a producer of the D.O. or DO Not Podcast, which you can listen to here.

What inspired you to become a DO, specifically? Tell us your story.

I was a chemist before going into medical school. I’d finished my undergraduate degree at the University of Florida, and I worked for a company in Savannah, Georgia. I was very unhappy, all over the place, and didn’t know what I wanted to do. I dabbled in many things, including being a high school teacher—loved mentoring kids or anything with a group of people—but I hadn’t found my calling. I even earned my Master's degree in molecular medicine. A couple of my friends were in medical school—they were learning pharmacology and I was looking at their material and found myself interested, even enjoying studying the topics with them. That is when they said to me, “Why don’t you go to med school.” I’d never even thought of that. I like people. I like science. I like mentoring. That’s what a physician is and should be—it made sense, so I decided to apply to medical school.

We often hear the phrase ‘osteopathic distinctiveness’ used across the profession. What does that phrase mean to you personally?

I was a scribe in the emergency room and met four amazing DO physicians. When I worked with them, I felt like I wanted to be like them. They sat down on the bed of the patient, they held their hand—didn’t even take their computers inside the room. The patient would always laugh, smile, cry—they would tell us things that would help us diagnose them. In just the way those DOs would connect with their patients—I was inspired to go into osteopathic medicine. That’s the main reason why I only applied to DO schools.

Looking back at how you prepared for your most recent level of COMLEX-USA, would you have taken a different approach to studying? What advice do you have for other COM students who are preparing for COMLEX-USA?

COMLEX-USA questions include a lot more detail, are more person-oriented, and have answer choices that are very non-invasive. Every answer choice on every question still tested my scientific knowledge, but I feel as though COMLEX-USA also tests the concept of patient-centered osteopathic medicine in a way that 2nd years can understand.

I was actually surprised by how well I scored. The only regret I really had was inundating myself with too many study resources. I think if I just stuck with two or three and not listened to everyone saying, “This is better than this and that’s better than that,” then I would’ve been more selectively driven. Therefore, I would say to try and find those two or three study resources that work for you and stick with them. Also, do a lot of questions and practice exams. I did a lot because I'm a very anxious test-taker; I don't like taking exams. There’s a lot of pressure.

My best piece of advice is to try to remember that it’s just a test. If you’ve put in all the work prior to taking it and you give it your all, the results will come. You really just need to focus on what you're doing while you're studying—focus on that test, and be as relaxed as possible. I approached each question like I’d treat a patient. Because they are patients; they’re vignettes. I don’t want to misdiagnose my patient so I’m not going to get this question wrong. It’s true!

My final piece of advice I'd give students is, when you're taking practice tests or practice questions, you need to simulate the environment of where you're going to take your exam. Go into a quiet room, have a desk, take it with a similar keyboard, similar mouse, and sit with good posture. Get a chair that's similar to what they have in Prometric testing centers and sit in it as if you're taking the real test every single time, every question. With the right body language, you self-perceive yourself as more confident.

The Road to DO Licensure has many unexpected challenges that I’m sure you’ve experienced, including burnout, stress, and anxiety. Tell me some of the major challenges you’ve faced while taking COMLEX-USA and some advice on how you personally overcame them.

My first two years of school were rough. I was a non-traditional student- I was out of school for three years prior to coming in. I didn't have that study routine down my first year, but I didn’t let that stop me from being who I was. I still joined SOMA. I engaged in extracurricular activities, and I still do—that's what gives me life. It was a struggle to find that rhythm my first year, and there were tears, there were long nights, there were times where I had to tell family, “I can't talk to you today.”

There was a lot of sacrifice—I even had to miss my niece being born. I had to shut people down at the time and ask for forgiveness later. My family knows I love them, but they struggled to see the path I had to take. I’m a 1st generation; my mom came from Mexico and my dad came from Iran. They didn’t go to college—I’m the first. Because of this, I had to be very self-motivated and I had to work my own way through college with four jobs. I worked as a shoe salesman, a waiter at a Mexican restaurant, a barista and a chemistry tutor. My mornings started at four in the morning, working at a coffee shop in the atrium of Shands Hospital, University of Florida. This was all while still being a full-time student.

I also encountered a great deal of financial strain during my first year, almost requiring me to pull out of medical school, but members of my community helped me. I regularly go to the gym to help with stress, and friends there noticed how I was struggling. Without a word to me, they collected donations from community members. They told me I was surrounded by friends: lawyers, dentists, and DO physicians who wanted to help and encourage me. They told me, “We don’t want this paid back. You’re helping our community, and we know what you as a DO physician are doing. We see a light in you and we want to keep that on.” It gives me chills thinking about it. I have been blessed to encounter so many wonderful people on my journey.

I also took my board exams during the roughest period of the pandemic in June, 2020. COVID was messing up all the schedules. The stress level, anxiety, and the trauma of repeatedly having to be rescheduled was extremely high. My exam was pushed back from June to July to the end of July—the day after my birthday. It was stressful, but I looked at it and said to myself that it was more time to study. That extra month gave me the composure to be able to sit down and say this is just a test.

Have you encountered other mentors that have helped get you to where you are today?

One mentor I had was Mr. Timothy Wall, in eighth grade. I was getting C’s and D’s the grade before, but he took one look at me and told me that I could do more. Meanwhile, I couldn’t read because I was a product of immigrants, and learned only broken English. I know four languages. He took me under his wing and guided me. He turned me from a C and D student who started in ESL courses to an honors student who graduated as valedictorian of my eighth grade class.

You were appointed to the Special Commission after your nomination by SOMA—tell us what this means to you.

My involvement with National SOMA began with my desire to contribute to my profession and ensure the student voice will be heard. As I have progressed through my years in medical school, I have witnessed many events that have affected osteopathic schools, students, and the profession as a whole. This appointment grants me the opportunity to ensure that the perspectives of the osteopathic student body are represented during discussions that will impact their future. Moving forward, this appointment will aid in providing me the experience and resources to be an osteopathic physician who confidently advocates for our profession.

Part of the inaugural class of The Oklahoma State University College of Osteopathic Medicine at the Cherokee Nation,...