BE the Change You Want to See — Interview with Nicholas Harriel, OMS-IV, PART I

Nicholas Harriel is a passionate osteopathic med student at New York Institute of Technology College of Osteopathic Medicine, and a U.S. Army veteran who served as a medic in Afghanistan. 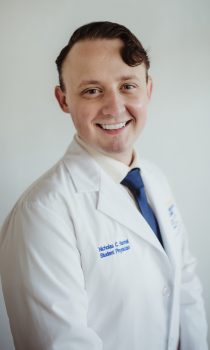 He is a dog-parent of three raring pups and an avid advocator of osteopathic distinction and LGBTQ+ rights. Nic is focused on becoming the change that he wants to see in his community and we were so excited to hear about his personal journey on his Road to DO Licensure.

Why did you decide to choose osteopathic medicine as a profession?

It was my experience in military that inspired me to become a DO. Honestly, I didn’t think I could become a physician initially. I hadn’t met many people with my background—or at least didn’t know many people with similar backgrounds who had become physicians. I’d started part-time courses on a nursing track while in Afghanistan to become a registered nurse—little did I know at the time, most of the physicians I worked under were DOs.

I gravitated to them because they placed a great deal of emphasis on the whole patient and challenged me. One night, a man by the name of Col. Francis saw me studying at the clinic late (it was the only place that had Wi-Fi). He took the time to explain how he became a physician and the principles of osteopathic medicine. For the first time, I thought, “Wow, this sounds like me—this sounds like something I want to do.” I changed my major a few weeks later. Funny enough, I would go on to primarily work with DOs until I transitioned to the reserves. Those mentors I gained while on deployment and after returning to the states are also the ones who wrote my letters of recommendation for medical school.

What really inspired me to choose osteopathic medicine was my exposure through my mentors far before I ever knew I wanted to become a physician. That’s one of the reasons I push for pre-medicine programs like pre-SOMA. I think DOs are made far before they ever walk the halls of our academic institutions.

Tell us more about your experience in the military.

I grew up in a small rural town in southern Louisiana and started living on my own at 17. I worked full-time through high school, and after graduating, I started a local licensed practical nursing program. When I got out, I wanted to continue with my education, so I talked to my brother about his experience in the military, which inspired me to join the US Army as a medic.

I met my husband shortly before deploying to Afghanistan in 2013, in support of Operation Enduring Freedom. On the very night I came back to the states, he surprised me with a proposal. We were lucky to be able to get married in Illinois right before the repeal of the Defense of Marriage Act.

The following year was interesting with balancing newlywed life and a military schedule, but after making it through deployment, a hectic schedule was really nothing. This also helped prepare me for managing my time in medical school. But before then in 2015, I left active duty and joined the reserves in order to start full-time at Austin Peay State University (near Fort Campbell). I also continued nursing part-time and served as a noncommissioned officer leading small teams focused on medical training for the unit.

I had a great experience leading up to medical school that made me able to appreciate the challenges of medical leadership and administration. I was activated to stand up a 30-personnel clinic for an 8,000-soldier training mission.

Following that, I continued in the reserves in my first year of medical school, and eventually transitioned to the inactive ready reserves where I am now.

How does it feel to be the National SOMA president and how did you get here?

I have a background in service, but I’d promised myself that I would place emphasis on medical school and not get involved with anything until after I graduated. Just like most students, I was afraid school would be overwhelming. Don’t get me wrong, it has been—especially that first year. I didn’t end up keeping that promise to myself. I saw all the good things that SOMA was doing for the community and I was hooked.

I became invested in SOMA at the national level; I wanted to continue helping my peers make an impact on the communities our chapters serve. I campaigned to become a region trustee so I could help other students lead their chapters. After a lot of deliberation, I decided to run for president.

Being the SOMA president is amazing. I get to advocate for and serve our members—medical students from various backgrounds—on a multitude of different issues. I get to work alongside an amazing leadership team to push for real change. While I advocate for more than 15,000 members on the national stage, I am also answerable to those I serve. That and our amazing 51-year legacy can, at times, come with pressure. Still, I couldn’t imagine myself doing anything else. I am very, very thankful for the confidence others have given me to serve them in our organization.

From a holistic viewpoint, having taken COMLEX-USA, how does osteopathic medicine stand out to you personally?

You know, this is a great question. What is osteopathic medicine? How do we give ourselves, as students, an identity and how do we own that?

At present day, I believe osteopathic medical education emphasizes patient-centered care through a collective view of factors that impact those we care for. Our institutions focus on the whole person, and that influences our education from the first day we enter school. This includes mind, body, and spirit, but also the interrelatedness of systems in the body; social, environmental, and behavioral health determinants; accessibility to care; as well as physician-patient relationships. We pair this amazing emphasis on medical education with approaches to care that allow the body to better heal and ensure our students are well-equipped for modern care practices within clinical environments. Osteopathic medicine stands out because of our approach and emphasis within medicine, and I think that is evident when DO students work with patients and clinical staff.

Aug 20, 2021
In celebration of GME Professionals Day, we recognize the GME coordinators, managers, and administrators who work...