The NBOME Recognizes Award Winners at Midyear Board Meeting

PHILADELPHIA, PA— The National Board of Osteopathic Medical Examiners (NBOME), an independent, not-for-profit organization that provides competency assessments for osteopathic medical licensure and related health care professions, honored the following individuals at its midyear Board meeting: The Santucci Award is the highest honor the NBOME bestows. It is given to members of its Board, staff, or committees for outstanding contributions to the mission of the NBOME, and requires a minimum of ten years of service to the organization.

This year’s recipient, Eugene A. Oliveri, DO, has been a tireless supporter of the NBOME and of COMLEX-USA for decades. He served the NBOME on its Board of Directors from 2000-2009, and in numerous leadership roles including Membership/Nominating, Product, and Executive Committees.

In 2000, as President of the American Osteopathic Association (AOA), Oliveri was the Dr. Bryant L. Galusha Lecturer at the Annual Meeting of the Federation of State Medicals Boards, and described the importance of osteopathically distinctive licensure assessment and COMLEX-USA in protecting the public.

He also advocated for Louisiana’s acceptance of COMLEX-USA, the last state to do so, in 2005. Oliveri gave the A.T. Still Memorial Lecture at the AOA’s House of Delegates in 2009, focusing the address on the 75th anniversary of NBOME and the importance of the NBOME and osteopathically distinctive assessment as “the weaving tapestry that connects the profession together.”

Oliveri is certified in addiction medicine and is a fellow in both the American College of Osteopathic Internists (ACOI) and the American College of Gastroenterology. He led a practice in Farmington Hills, Mich., for 30 years and was professor of osteopathic surgical specialties and assistant to the dean at Michigan State University College of Osteopathic Medicine (MSU-COM). He also served as associate program director of the gastroenterology residency program at Botsford Hospital (now Beaumont Hospital – Farmington Hills).

“Having spent time on many boards and committees, I realize that being on the board of the NBOME was a very different experience,” said Oliveri. “Our examination means that we are qualified, we are trained and we are outstanding physicians that take care of the public. I would like to say how proud I am to be here. I am truly humbled and I thank you.” 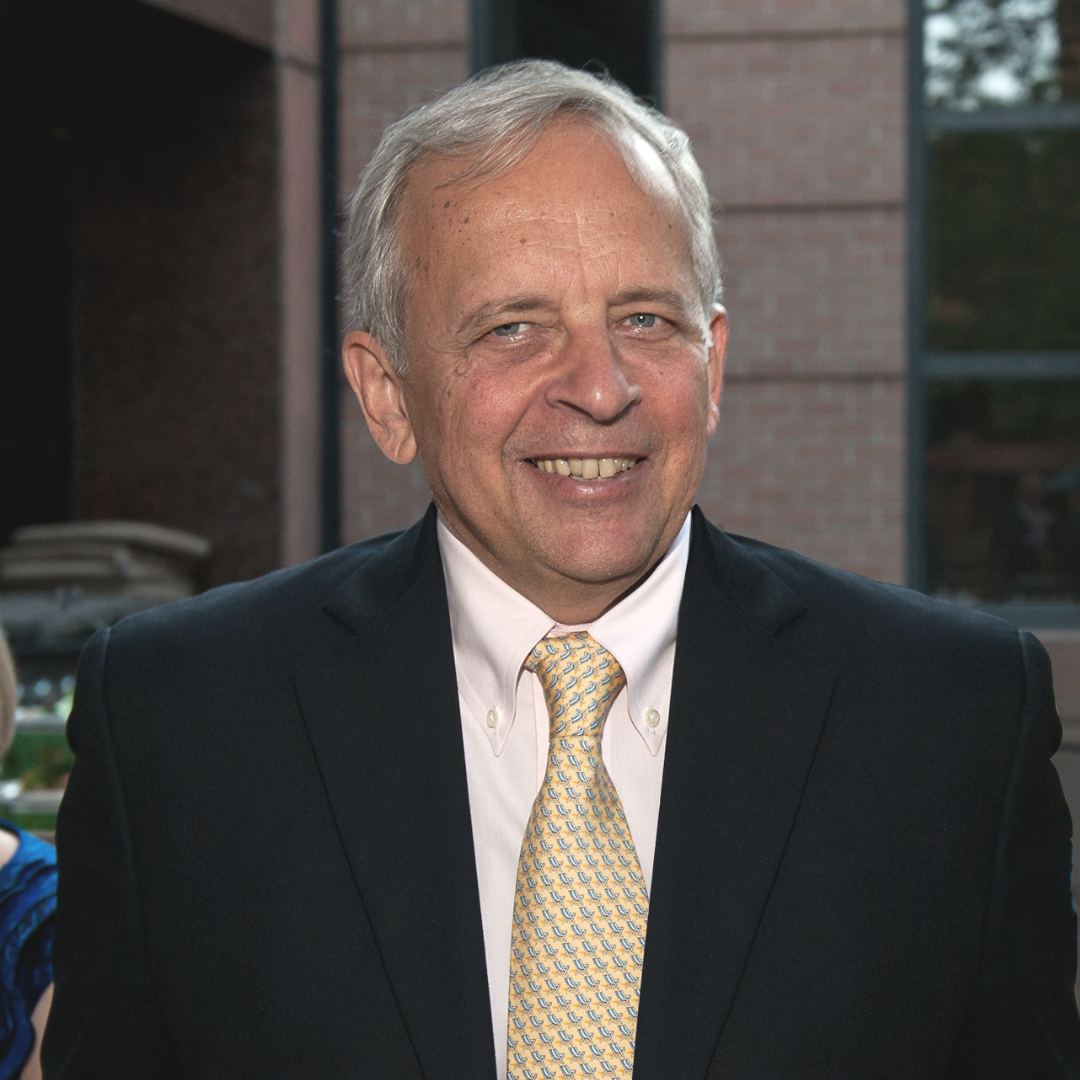 This year we announce the inaugural John E. Thornburg DO, PhD, National Faculty Leadership Award. This award will be bestowed periodically to National Faculty leadership who have distinguished themselves by their longstanding contributions to examination development, committee work, or related activities. It was presented at the meeting to John E. Thornburg, DO, PhD.

John E. Thornburg, DO, PhD, has diligently served the NBOME in numerous capacities for four decades.

He began as an NBOME National Faculty member in 1982 and during his tenure served as an exam reviewer; National Faculty Chair for Biomedical Sciences; Chair of the NBOME Pharmacology Test Construction Committee and the Level 1 Exam and Advisory Committee; on the NBOME Blue Ribbon Panel; as COMLEX-USA Level 1 Coordinator.

Thornburg was elected to the NBOME Board in 2001, and served as its chair from 2009-2011. In 2014, he was honored with the Santucci Award in 2014 for his remarkable tenure with the NBOME. After completing his service on the Board, Dr. Thornburg reconnected with his test development activities, serving as National Faculty Chair for Foundational Biomedical Sciences and the COMLEX-USA Level 1 Exam Chair from 2013-2020.

He has mentored countless of current NBOME National Faculty members, and many—including current members of the NBOME Board—credit Dr. Thornburg as the reason they got involved with the NBOME.

Thornburg is professor emeritus of pharmacology and toxicology at Michigan State University (MSU). He has served that institution for nearly 45 years in numerous educational, clinical, and leadership roles and authored 57 publications and given 61 lectures on various topics related to pharmacology. In 2012, the American Osteopathic Association awarded him the Distinguished Service Certificate for his dedication to the profession, and MSU-COM honored him for distinguished teaching.

“My long experience with the NBOME has been such a great experience the whole way around,” said Thornburg. “I am very appreciative of and honored by this award.” 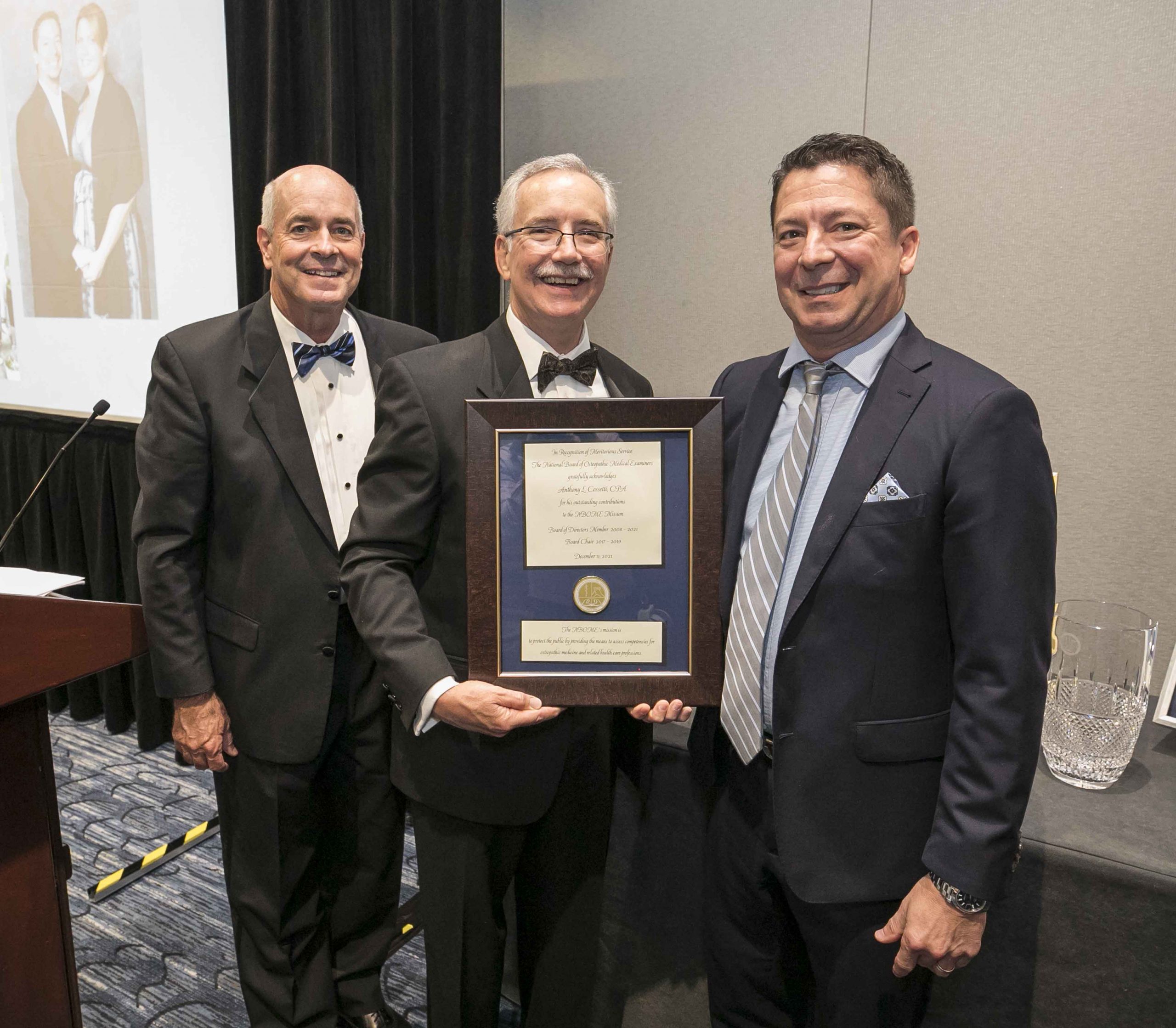 The NBOME bestows Meritorious Service awards to individuals, either within the osteopathic profession or outside of it, who have made outstanding contributions to the NBOME mission.

Anthony L. Cossetti, CPA, has served on the NBOME Finance Committee since 2015, and also on its Audit Committee. He also played an important role in the prudent stewardship of the organization’s financial resources.

He has more than 27 years of financial, banking, and accounting experience. Some of his prior posts include director of finance at Title Alliance Ltd and as senior vice president, corporate treasurer for Beneficial Bancorp Inc. He has also held senior finance roles at Unity Bancorp Inc., Sovereign Bank, and MBNA America, N.A., and served as an advisory board member to the Federal Home Loan Bank of Pittsburgh.

“I am humbled to be honored alongside two men who have meant a lot to the profession and the organization,” said Cossetti. “It’s been a pleasure to serve and I’ve been so grateful to help in any way I can.”