Women and Leadership in Osteopathic Medicine – Interview with Immediate Past Board Chair Geraldine O’Shea, DO

The osteopathic profession has been an advocate of female physicians ever since its founding in 1892 when Andrew Taylor Still admitted six women into the first class of his new medical school. Today, women make up nearly half of all DOs in active practice and constitute a majority of first-year osteopathic medical students. 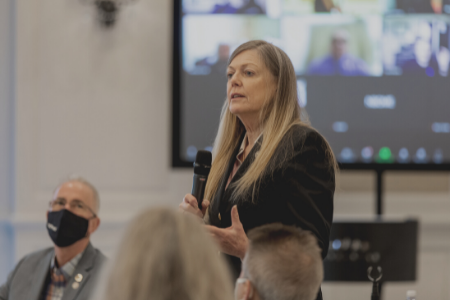 This Women’s History Month, we’re highlighting the work and contributions of Geraldine O’Shea, DO, the NBOME’s immediate-past Board chair, who has been a leading voice in the osteopathic profession for more than 20 years.

Her path to leadership began as a student at the College of Osteopathic Medicine of the Pacific. While editor of the school’s magazine, The Student DO, then-Dean Donald Krpan, DO, recognized her as a leader immediately.

“He invited me to meetings of the Osteopathic Physicians and Surgeons of California (OPSC), to AOA House of Delegate meetings,” she said. “He saw potential in me and wanted me to experience all these things. And once you get a taste of the AOA, you’re hooked.”

Indeed, O’Shea—who also runs the Foothills Women’s Medical Center in Jackson, Calif.,–has served the AOA in numerous capacities, including as a trustee, as chair of its Strategic Planning Committee, and as vice-chair of its Bureau on Federal Health Programs and Council of Women’s Health Issues.

She has also served the profession as president of the Osteopathic Medical Board of California, the American Association of Osteopathic Examiners, the Federation of State Medical Boards, and the OPSC.

“Being a good leader means being a sponge,” she said. “Meet and listen to interesting people who are willing to stand for what they believe in—it’s a rising tide that carries all boats.”

Most recently, she completed her two-year term as the NBOME Board chair, appointed just a few months before COVID-19 took hold of the world.

“The hardest part of leading at that time was the shifting sands,” she said. “Easy decisions were scarce. We shared the information we could with our COMs, tried to support students through an incredibly stressful time, and looked at the safety of our community through every possible lens.”

O’Shea notes that her work at the helm of the Board would not have been possible without those around her.

“The NBOME brings in the best people,” she said. “Those who are so willing to be distinctive and different, and happy to bring that subset of talents into the mix. Richard LaBaere, who’s now the current Board chair, was a great resource for me.”

Even though the percentage of women practicing osteopathic medicine continues to grow, O’Shea hopes to see even more in positions of leadership. For those considering a leading role in their careers, she offers this advice:

“Listen first and speak second. Get a good mentor. And finally, be proud of who you are. As women and as osteopathic physicians, we are in a unique position to be nimble enough to make change—and change always comes from the minority. You have a unique skill set you’ve honed over the years—use it to go as far and as high as you want.”